Repositories in the Digital Libraries Federation are not only magazines, archival photographs, old prints or individual works of certain artists – there are also objects documenting life and scientific output of outstanding persons. In the post below we would like to introduce one of the most famous historic figures of science world not only in Poland, but also the whole world. Marie Skłodowska Curie was a Sorbonne professor and also the only woman who was awarded twice with the Nobel prize – first one in physics and the second one in chemistry. This made her one of most usually mentioned idividuals – symbols of as well most important moments of women emancipation between 19th and 20th centuries, but also whole feminism movement. What is even more interesting, her husband Piere and daughter Irène were also awarded with the Nobel prize.

Among stocks of libraries belonging to the Digital Libraries Federation we can find quite a lot of objects documenting scientific and private life of Marie. It will not be a surprise that most of publications in this subject are shared by the Digital Library of Marie Curie Skłodowska University in Lublin, there are mainly books and biographic booklets about particular periods of scientists activity: an article For Poland and France. Marie Curie Skłodowska during times of 1st World War, American trip of Madame Curie – a description of two Maria’s  excursions to America; French biography Madame Curie illustrated with interesting photos from private life; and an Autobiography written by Marie in 1923 as a respond for a request from American friends, published in Poland in 1990. As far as it goes for the science works of the researcher, it can be found in a few DLF repositories. Wolne lektury share a work which was a PhD thesis of the scientist – Study on radioactive forms. In the the Silesian University of Technology Digital Library we can read Polish and French (1, 2) version of thesis called Radioactivity, written by Curie couple. The Podlaska Digital Library shers a short story about researcher and her scientific achievements entitled Marie Skłodowska-Curie and the story about radium dicovery from 1925. Whereas in the Digital Library of WBP in Lublin we can read a work About new radioactive forms read by Marie at the common meeting of Chemistry and Physics Section at the 11th Congress of Polish Doctors and Biologists in Cracow in July 1900. In the end we would like to depict a really notable collection of  posters illustrated among others with scans of private letters of the scientist, gathered in the Warsaw University of Technology Digital Library – they come from exhibition in 2011 “Polska – matters and people. Fragments of correspondence of Marie Skłodowska-Curie” in part “Science”.

Marie during work with her daughter Irene

Marie with her daughters

Marie on a bike with her husband 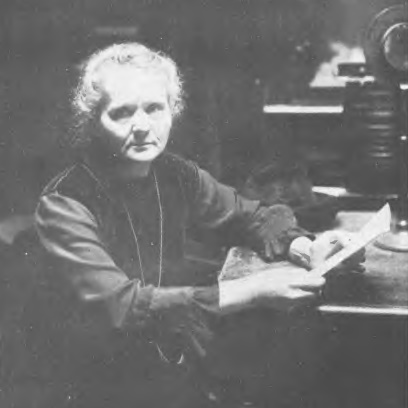