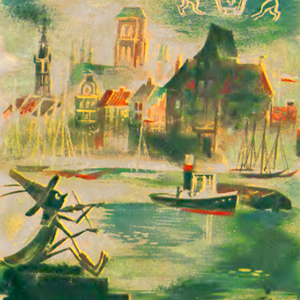 Apart from a large amount of newspapers dedicated to serious matters of adults in collections of Polish digital libraries, we can find also plenty of magazines pitched at younger readers. Especially interesting ones are from the first half of 20th century, usually beautifully illustrated, served not only as an entertainment but also for educational and didactic function. They sometimes had religious character, i.e. kids newspapers called Dzwonek (eng. Bell) or Mały Gość Niedzielny (eng. Little Sunday Guest) freed by the Silesian Digital Library. What’s impressive, the second one has been published since 1927 till today, currently also online. Another interesting publication, mainly because of the artful illustrations, is Mały Światek (eng. Little World) from the beginning of 20th century, available in Podlaska Digital Library. Moreover, in the MCSU Digital Libarary we can find a newspaper Mały Ster (eng. Little Helm) which was published during occupation in 1942-1945. The last one we would like to present is a presumably well-known weekly magazine Świerszczyk (eng. Cricket) which exists until today. Part of them (1945-1951) is available in the Digital Library University of Łódź. 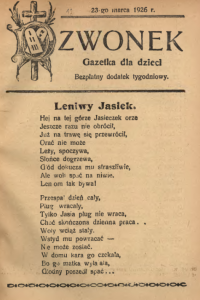